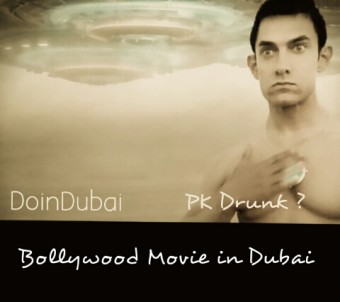 What does PK mean?

PK means someone who’s a little bit drunk so isn’t making very much sense. Aamir (an alien from outer space who can’t get home) is “Christened” PK when none of his comments make any sense to the Indian citizens he encounters. They therefore conclude he is a little bit drunk or PK. Ironically it is common for many Indian men to be known simply by their initials!

What is the point of PK ?

The persona of PK is the vehicle Aamir chooses to point out that while religion makes us all different, humanity reminds us we are all the same. After all none of us are born with a label or stamp (tappa) that says we are Muslim, Hindu, Sikh, Christian or of any other faith. So Aamir concludes in his simplistic view that perhaps religion should be set aside and people ought to rely not on their “gods” or their representatives on earth but rather on each other to solve their problems and pursue happiness in this way.

How does PK provide an insight into the Indian psyche?

While India is a secular country (religion looms large in everyday life) organised worship with all it’s rites and rituals is a serious affair and part of parcel of growing up for rich and poor alike. Religion is ingrained in the Indian psyche. From students desperate to do well at exam time to people wanting to return to good health and everything in between, your God can help. PK therefore concludes some God could help him return home if he fulfills the requirements of prescribed worship. He is therefore flummoxed and downhearted when his efforts of offerings, prayers, flowers and rituals go unheard.

Is PK worth seeing?

Yes I think it’s worth seeing. PK makes some salient, basic points about why we do what we do and suggests there may be other, possibly better ways of living our lives. It provides a real insight into the psyche of the Indian people and questions many of it’s traditions. There is a subplot of the heroine (a Hindu girl) being jilted by her (told you so) Muslim boyfriend. Interestingly Aamir Khan – a Muslim himself,  has a Hindu film maker wife Kiran Rao. But some will find the film overly long, full of production holes and some glaring stereotypes.

Nevertheless PK succeeds as an all round entertaining movie that will increase your understanding of how many Indians really think. It may even make you stop and question your faith if you have one. Locations as bizarre as Bruge in Belgium to Bikaner in Rajasthan feature in the movie so there is plenty of colour and costume.  Don’t try and make sense of it. Great for a rainy day.

Has this review inspired you to see PK? Do let me know what you thought if you’ve seen it.

Top tip go to the Indian Pavilion restaurant just next door to VOX cinema in MOE and take away a plate of their delicious vegetable samosas and have while you’re watching! Really good.