Scape Dubai is the new restaurant and bar behind the Burj al Arab. I was very impressed with the setting, food and affordable prices.  This is must visit place if you’re taking out friends or family. Welcome to Dubai’s classiest restaurant –  Scape Restaurant and Bar. 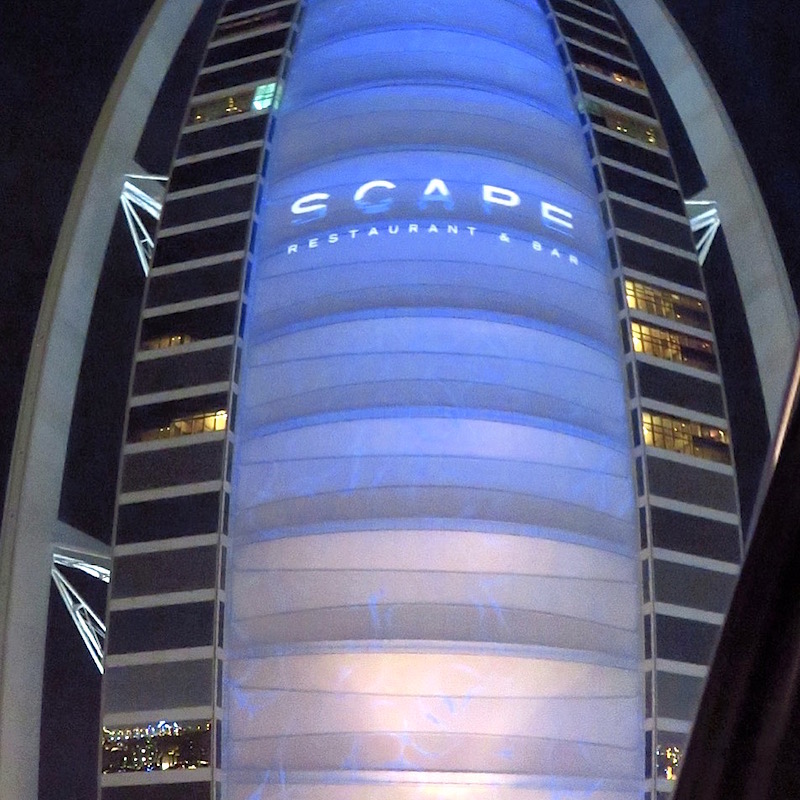 The setting of Scape Dubai

Scape Restaurant and Bar was previously called The North Gate I think. This is the newest, largest extension of the terrace behind the Burj Al Arab. This is separate to the newish Bab Al Yam restaurant that opened earlier this year. There are 3 dining areas, 2 outside and one inside that would seat almost 300 people in total. We went to the launch party on Thursday the 12th October 2016 and were very impressed. 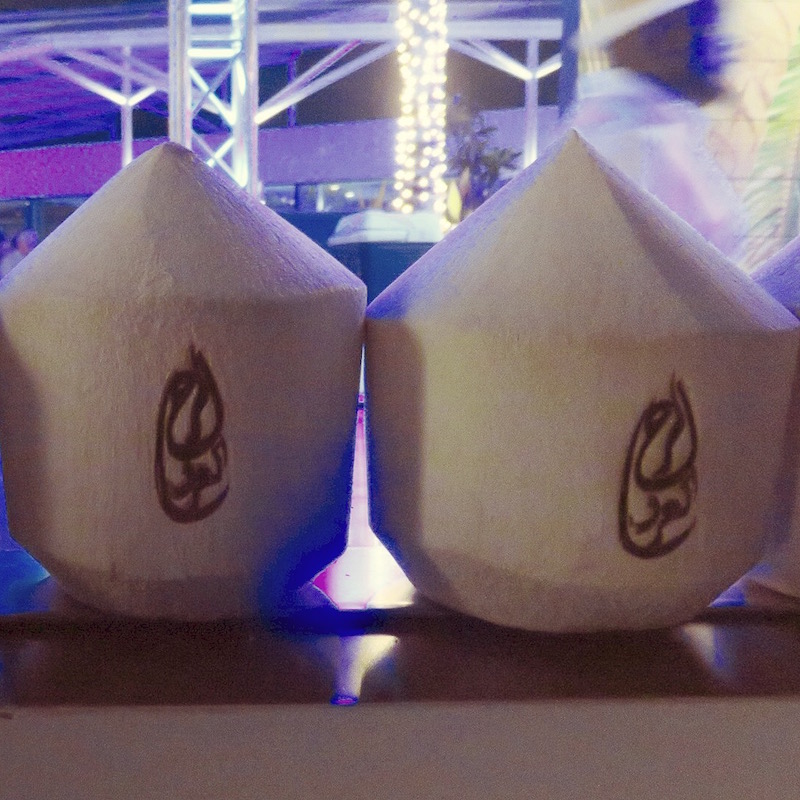 Just driving up to Scape is video worthy! The night we attended, the Burj Al Arab was illuminated with the words SCAPE Restaurant and Bar. The areas were set in front of a very large swimming pool, but you can’t eat at the pool as far as I could tell. There are plenty of spaces to eat on the terrace though.

The food at Scape Dubai

I liked the fact the menu was short and focused on modern dishes. There’s a definite Californian influence at play here. The menu has a raw section with different ceviches and oysters. 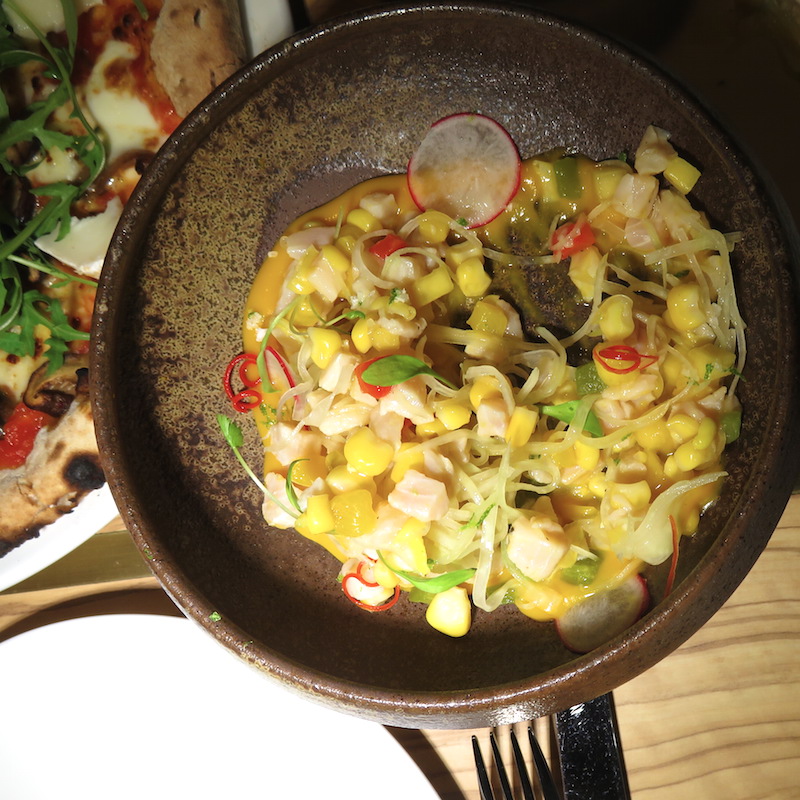 Pizzas again are very Californian featuring toppings like dill cream, smoked salmon and capers, that’s the pizza bianca. There are also cooked seafood dishes, we tried the sea bass with vegetables, but I really wanted to try the chilli crab burger with avocado and plantain chips but this had run out at 3pm the same day! I’ll have to go back… 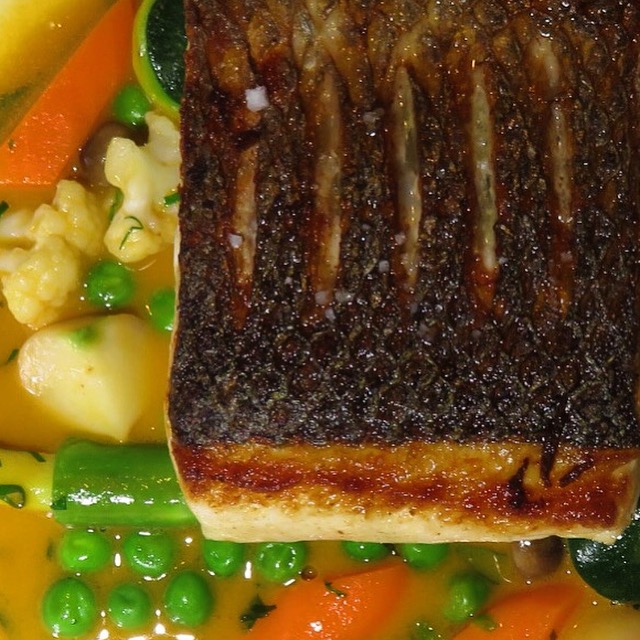 I liked the thyme ice cream and poached apricots that accompanied my chocolate tart for dessert. 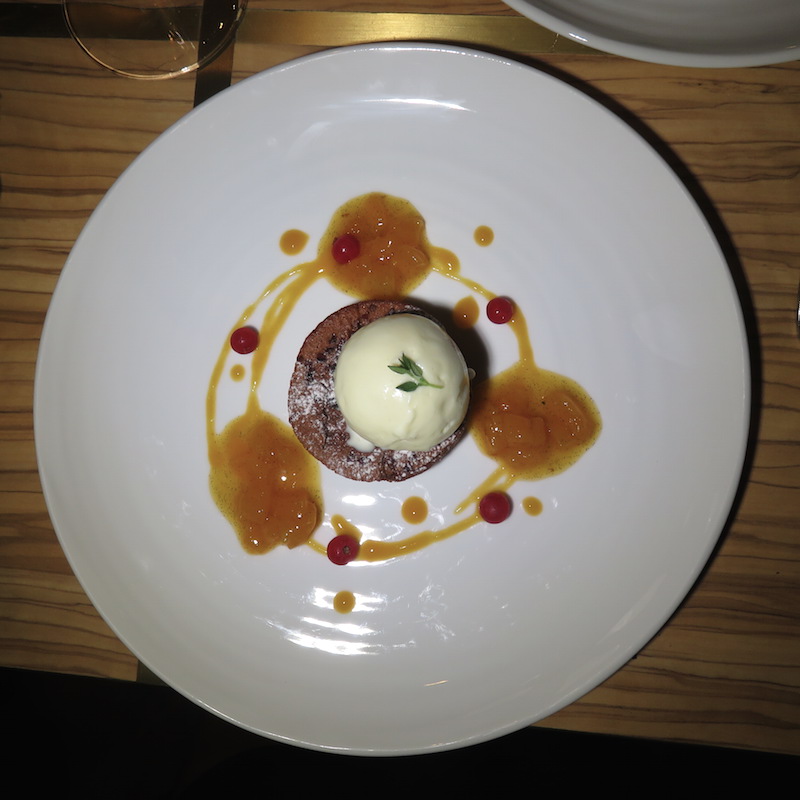 I LOVED the fact that Scape was affordable, that’s not to say it’s cheap though. Truffle fries as a side for AED 35 and a good sized sea bass with vegetables will cost you AED  170. Similar dishes for nearer AED 220 are available at Catch Dubai. The crab burger I’m craving is AED 125, again an affordable option, the pizzas are priced at AED 90.  You definitely need to book ahead for this restaurant. As far as I know it’s open for lunch and dinner at the moment, lunch is from 12pm to 3.30 pm and dinner starts at 6pm and carries on till 11pm. There is a dj but thankfully the music isn’t too loud at all! This would make a perfect place for those Californian style breakfasts as well, if they decide to offer them. 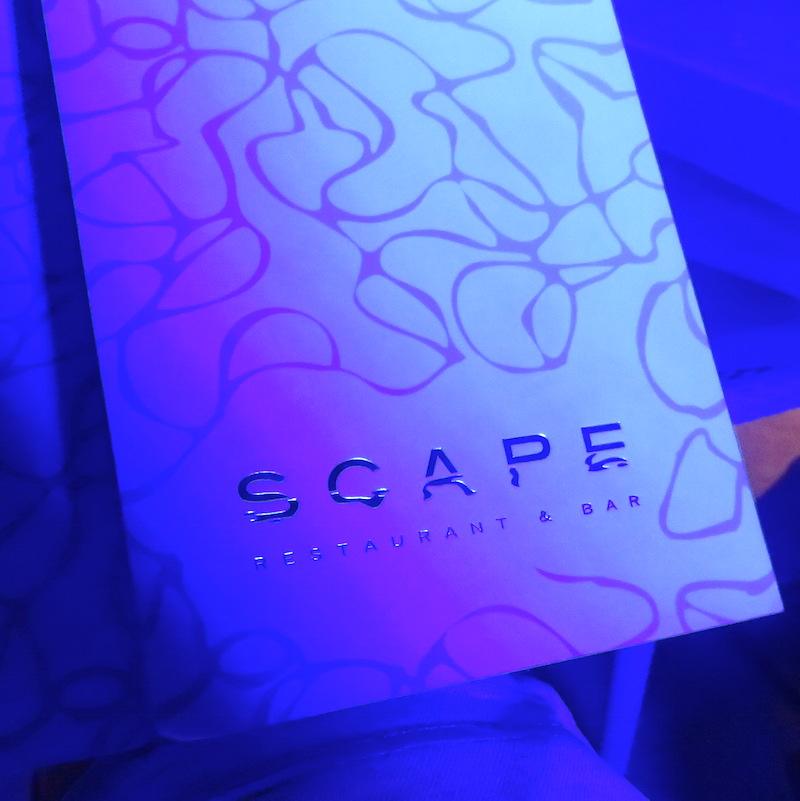 If you just want to spend the day, you could take a cabana either a regular one or a royal one. Here’s the deal:

Regular Cabana on a WEEK DAY costs AED 2500 for 2 people but includes tea/coffee, soft drinks and fresh fruit, expect to pay AED 3000 for a week end.

Opt for a Royal Cabana on a WEEK DAY and pay AED 3750 for 4 people, this goes up to AED 4500 at the week end. There will be plenty of room at 75 square metres! Or you could just walk on the public beach behind the Burj Al Arab and take a dip in the deliciously warm (at the moment) Arabian Gulf, for free. Parking is AED 2.00 on the street. 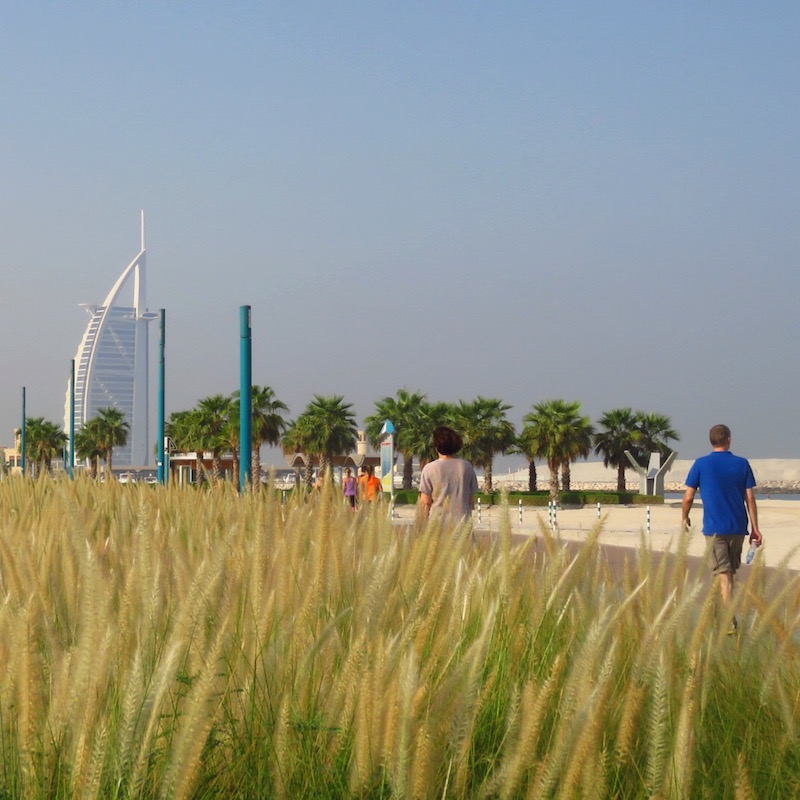 While the restaurant isn’t new, it has been completely refurbished with floor to ceiling glass windows, making the best use of it’s position in front of the Arabian sea. A radical colour change from when you walk around the rest of the hotel, no multi coloured carpet or gold bling at Bab Al Yam. Instead expect light and airy blonde wood flooring with tables and chairs to match. Most of the tables are around the almost 360 degree windows so everyone eats with a view. 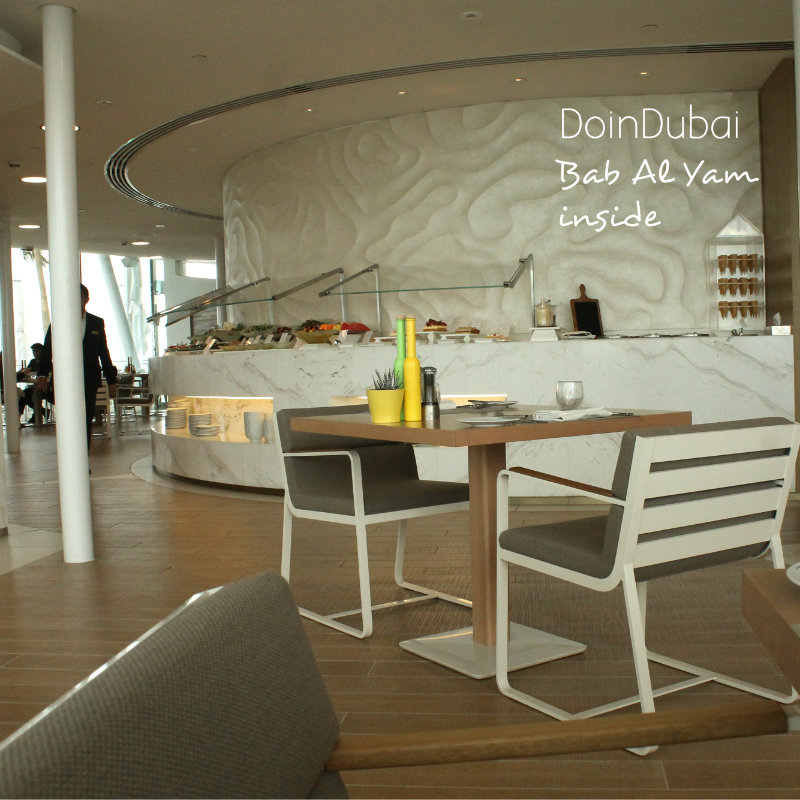 I saw the Atlantis on one side and walked around to see the Burj Khalifa on the other, this picture was taken with a long lens on my Canon camera, it won’t seem so near when you see it! 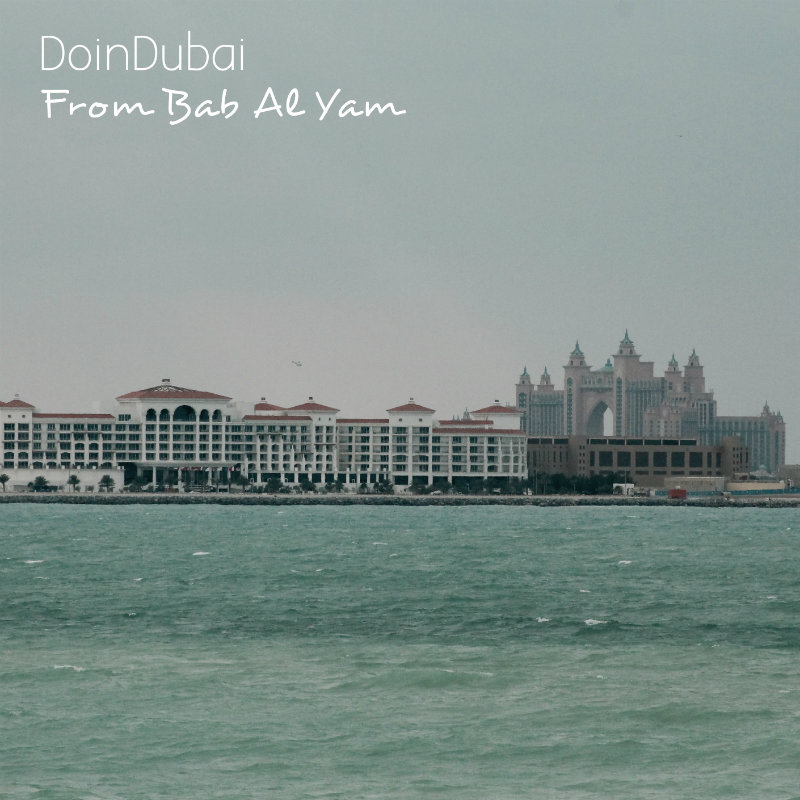 The food at Bab Al Yam is most definitely Mediterranean in style with some Arabic style dishes as well. There are 2 chefs on hand at the live cooking stations all the time and both are very experienced and happy to chat to you about anything and even customise some dishes. Their chef de cuisine Mohit Bhargava  was telling me that they do, for example, accommodate  Indian guests who don’t eat garlic and onions in their food.

We liked the flat breads with smoked salmon and sour cream with dill and the pissaldiere bites that were brought round to our table. But this is a buffet restaurant and you help yourself whilst pacing yourself too!

My picks would be the Kelly oysters from Ireland and the succulent crab to start with. 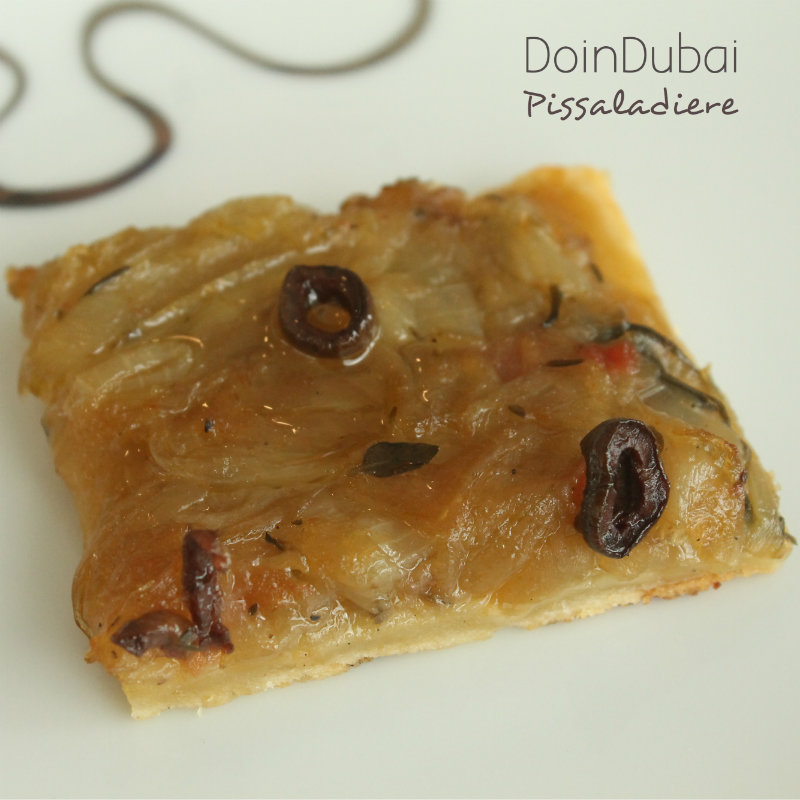 I really enjoyed the lobster main dish and very well cooked vegetables, not overdone at all!  Instead of chaffing dishes to keep things hot, they had a lot of large casserole type crock pots, giving diners the feeling of home cooking but on a larger scale.

The almond cake with blueberries was one of the best I’ve had, the frangipani almond filling was excellent and we even took a slice of this home!

The chocolate in the chocolate fountain is made without oil and flows out of a tap as opposed to flowing in a fountain arrangement! A great hit with the children and some adults!

Service in many of Dubai’s top restaurants is exceptionally high, but service here was actually that little bit better than I’ve experienced elsewhere. From how you can taste your prosecco before trying it to being offered a  blanket and everything else in between, service with a smile, was impeccable. They listened when we said we didn’t need our cutlery changed every time we got up for some more food and they seem to be trained to adjust their behaviour based on the guests attitude, that’s good.

You won’t get Asian food at Bab Al Yam

There’s something about sushi by the sea for me if it’s a buffet lunch I’m having in Dubai, but Bab Al Yam’s policy is not to serve sushi or any Asian cuisine. There isn’t really any spicy food on offer either although I think the chefs can add a little chilli to the freshly cooked items at the live cooking stations. They do have a separate Asian restaurant on the GM floor called Junsui that offers an interesting Chinese Tea with 4 or 5 types of dim sum.

Anyone who could afford it really, you go to Bab Al Yam for it’s position.  It’s right by the Arabian sea with fabulous views and you’re in the Burj Al Arab hotel! There were a variety of people there when we visited, but I think the large family from a Scandinavian country were having the most fun! Lots of kids really enjoying themselves and being well looked after by the staff, while their parents ate a luxuriously long, leisurely lunch with views of the sea and their children playing in the jacuzzi outside (despite the cold wind blowing!) 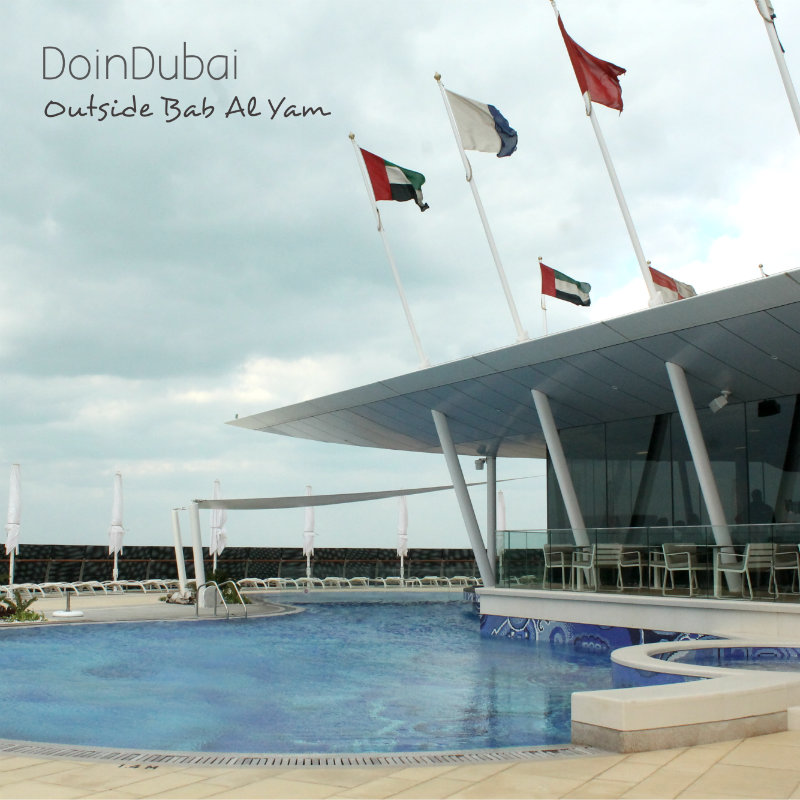 Lunch finishes at 3.30 but we left just after 4pm. Prices are AED 495 for lunch and kids 9 years and over pay half price, while kids under 4 years old eat for free. At the moment outside guests are not permitted to have breakfast here it’s only for residents but I think breakfast here would be an amazing meal, when the weather’s a bit warmer!

TIP if you want to go outside then the way you open the main doors to the deck is to SLIDE them apart! No pushing, pulling or security guards required! Want to stay at this hotel? You could get a deal on Hotels.Com here.