Welcome to the Waldorf Astoria in RAK

A perfect sort break destination from Dubai, we visited twice in Winter 2014 and here’s what makes this hotel so unique. 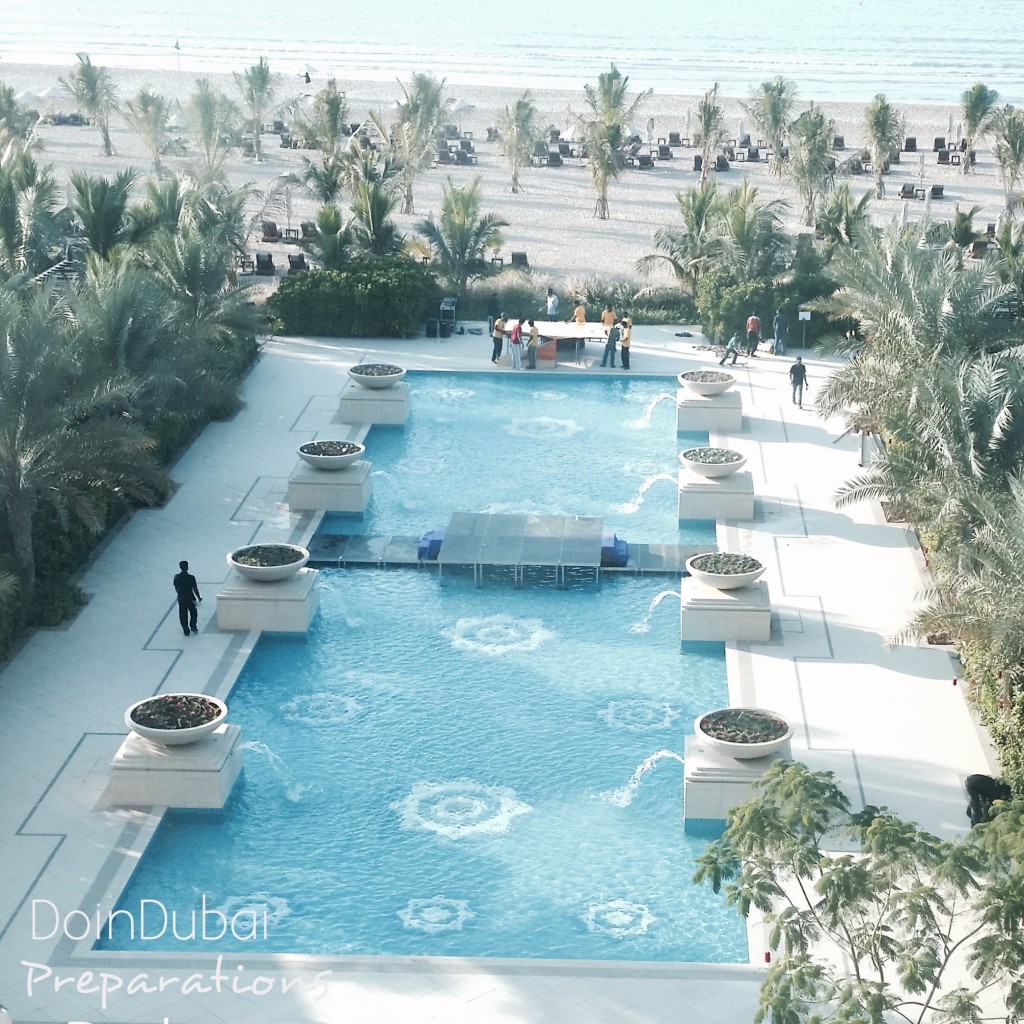 The Location of Waldorf Astoria RAK

This branch of the Waldorf Astoria is located in Ras Al Khaimah, an Emirate about an hour’s drive away from Dubai. Getting there is so easy. Just follow the road literally straight from the Arabian Ranches towards Sharjah and then look for RAK signs.  We visited on a week day morning and there was barely any traffic.

The Rooms at the Waldorf Astoria RAK

The rooms are some of the nicest rooms I have ever stayed in at a hotel in the UAE. The Waldorf Astoria has large, airy, well appointed rooms, most of which have clear views of the gardens or the sea or both ! The spacious bathrooms are all finished in a dark, Italian (I think) marble and are very luxurious. Many of the tiles and accessories are from RAK Ceramics themselves.  I loved the Salvatore Ferragamo toiletries used at the Waldorf Astoria in RAK. I don’t know if the Palm Jumierah property uses the same products?

The Facilities at the Waldorf Astoria RAK 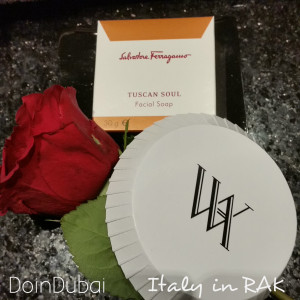 There are 2 pool areas, some gorgeous gardens which have an almost tropical feel to them and large well manicured lawns. There is also a wide expanse of private beach that borders a calm sea. However the sand isn’t the golden or white coloured sand of tropical beaches, it’s slightly more greyish. But that shouldn’t deter from your enjoyment of the sea and beach facilities. There is also a kids club for children aged 3 to 12.

But the highlight of the facilities for me was the spa. I didn’t try any of the treatments but did spend some time in the Thermal Lounge. This is complimentary for hotel guests and is a must try.

The Food at the Waldorf Astoria

We visited for a large Indian wedding, so many of our meals were not standard hotel fare. However the breakfasts were of a really high quality and so well presented. A large variety of fresh fruit, juices and jams were very much in evidence. I loved the fresh grapefruit juice and all the selections of breads and cheeses. I even took a tiny  pot of Alain Milliat jam home with me to have on some toast! I suggested fresh papaya as an addition to the breakfast buffet and was amazed to see it appear the next morning!

What’s worth knowing about the Waldorf Astoria RAK?

The Clock at the Waldorf Astoria is an iconic feature of the lobby. But this clock is different to most in that it has a special mechanism that indicates the 5 prayer times for Muslim guests. It has actually been programmed for the next 10 years to accurately indicate what times prayer should be undertaken! In fact CNN were so fascinated with this clock that they made a whole programme  on it!

The Waldorf Astoria is a merger of both the Waldorf and the Astoria hotels and the general manager of the hotel told me that originally the 2 New York hotels were connected by an alley. This alley became a place for society gentlemen to literally hang out and preen like peacocks so the ladies at the time named it Peacock Alley!

Art at the Waldorf Astoria RAK

The name Peacock Alley has stuck and in commemoration of this, members of the ruling family of Ras Al Khaimah, headed by his Royal Highness Sheikh Saud bin Saqr Al Qasimi, organised the design of a piece of art that reflected this peacock. The result is a stunning piece made entirely of black and white diamonds, sapphires and lapis lazuli. Luckily this was then very generously gifted to the  Waldorf Astoria by the ruling family. The bejewelled peacock even has real peacock feathers that have been shed by peacocks resident in the grounds of the Ruler’s palace in Ras Al Khaimah. It takes pride of place in the lobby of the Waldorf Astoria and is an exceptional piece and very appropriate reminder of the hotel’s history. 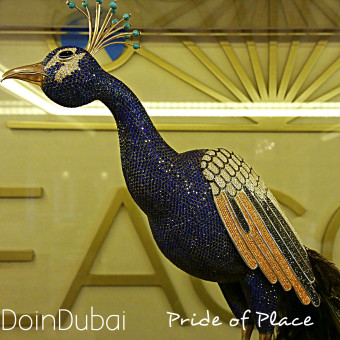 A South African designer has very cleverly incorporated a number of Islamic verses within some artistically printed tiles that hang either side of the lobby. These look like artistic geometric patterns, but are in fact easily read by those who are familiar with Arabic script.

Should you try the Waldorf Astoria RAK?

Yes definitely, an easy journey from Dubai and an exceptionally high standard of hotel. The location on the beach adds to the relax factor. I will be going again soon! Apparently RAK is a few degrees cooler than Dubai so do remember to pack a shawl or two for the evenings. The hotel offers something for all ages and is located right next to the Al Hamra golf course and shopping mall.

There are Christmas Carols in the lobby of the Peacock Alley on the 23rd of December from 5pm to 7pm where they will be serving mulled wine and Christmas treats! You don’t have to be a guest at the hotel to attend this community event. Oh and do remember to look at their Ginger Bread house, made using 1 whole ton of gingerbread!

Don’t bother looking at any other hotels in RAK, just stay at this one, it’s fabulous ! To read more about the intricacies of the design of the hotel have a read of this very comprehensive Design Fact Sheet

Happy Holidays from Monica at DoinDubai!

The winner is Helen Hume! Well done Helen, your voucher is on it’s way!

Who says Christmas is over? This gorgeous hotel has given DoinDubai a generous prize of dinner for 2 at the very classy Lexington Grill restaurant. Another EASY COMPETITION for my subscribers..

COMPETITION
Just like DoinDubai on Facebook
Make sure you’re a subscriber (it’s free) to DoinDubai
Then answer this question:

What is the name of the sister property next to the Waldorf Astoria in RAK that is in the same overall hotel group?

Answer via the comments section below. I’ll let the Random Number Generator call this prize on the 26th of January.
A perfect Valentine’s day present. Prize valid till the end of March 2015. HINT Take a closer look at the Google Map !

Biriyani in Barsha from a secret location. Is it worth it? UPDATED … END_OF_DOCUMENT_TOKEN_TO_BE_REPLACED 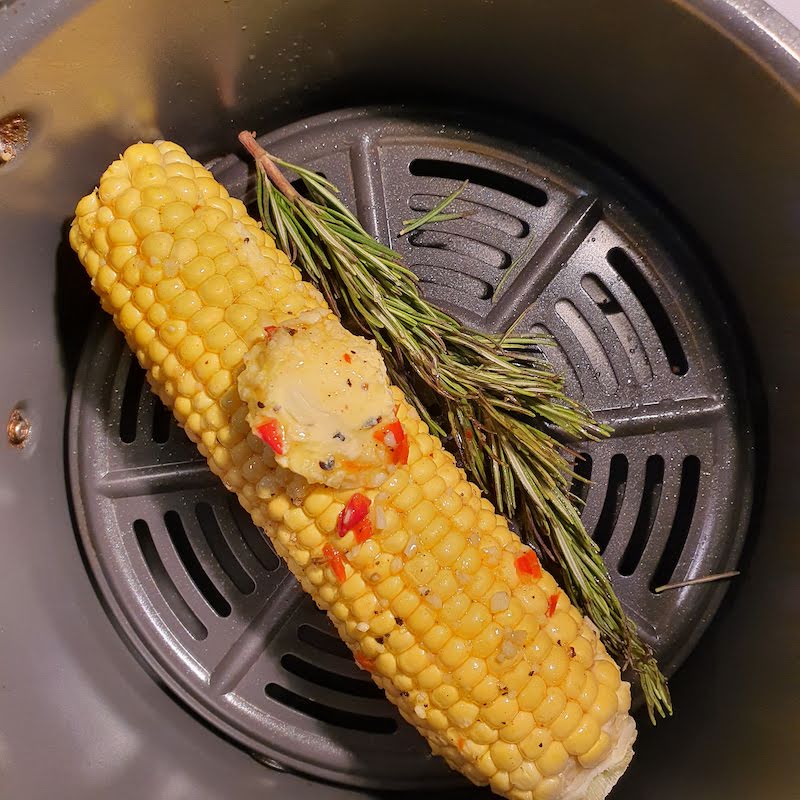 Gardening in Dubai - updated May … END_OF_DOCUMENT_TOKEN_TO_BE_REPLACED

Why is the Recke Multi Cooker  one of my … END_OF_DOCUMENT_TOKEN_TO_BE_REPLACED